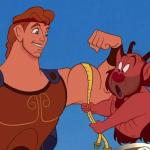 Let me start by saying that Hercules, Walt Disney Pictures’ 35th animated feature, makes for good family entertainment. Good, not great. While this film is capable of providing a ninety minute diversion for both kids and adults, it’s a far cry from such recent classics as The Little Mermaid, Beauty and the Beast, and Aladdin. A mere five years ago, Disney was developing top-notch animated movies on a regular basis. Now, in 1997, the studio’s efforts have become dull and routine. Complacency has set in. No one is pushing Disney and revenue is up — where’s the incentive to stop the assembly-line animated feature production and get back to creative movie making? Hercules has the dubious distinction of being the least-enchanting cartoon Disney has fashioned in over a decade.

Students of mythology may be irritated by the changes made to the legend of Hercules. Many of these are understandable, given the studio’s espousal of family values. After all, how much light- hearted fun can you have telling the tale of the bastard son of a god and mortal who grew up to kill his wife and children? So, instead, Disney has made Hercules the divine offspring of a couple that represents Olympian marital bliss: Zeus and Hera. Unfortunately, Hades, who is preparing a “hostile takeover bid” of the big mountain, has it on good authority that Hercules is the only one who can foul up his plans. So, using his inept assistants Panic and Pain, he has Hercules turned into a human. When Dad and Mom learn about this, they realize that their son, who is no longer immortal, cannot live on Olympus, and they allow him to be raised by Greek foster parents.

The majority of the film centers on the adult Hercules performing all sorts of grueling tasks to clean up the ancient city of Thebes (“the Big Olive” — if you can make it there, you can make it anywhere) and establish his status as a hero. His mentor is a satyr named Phil, who fills the role of the irascible-but-lovable sidekick. Meanwhile, Hades is out to get Zeus’ son, throwing all sorts of obstacles in his path — hydras, giant boulders, and a Mae West-type damsel in distress named Megara.

Hercules comes close to being a remake of the The Little Mermaid with a male hero. One could easily argue that all Disney animated films are similar (for example, the hero is always a loner who proves herself/himself through some deed of self-sacrifice), but Hercules is a little too blatant in its cannibalization of past themes and plot points. Besides that, this film has a distractingly episodic feel. Instead of coming together as a cohesive story, it’s like a bunch of thinly-related events strung one-by-one to reach a ninety-minute running time.

The most disappointing aspect of Hercules is the amateurish quality of the artwork. The “excuse” for this is that the animators at Disney were trying a new, angular style (one that is attributed to production designer Gerald Scarfe). In fact, this approach makes the film look rushed and, at times, incomplete. It is never a visual marvel — even the computer-generated scenes fail to impress. The sequences intended to offer the biggest spectacle — Olympus and the Underworld — provoke little more than a yawn.

With Hercules, composer Alan Menken is scoring his sixth animated Disney feature. His work on three (Mermaid, Beauty, and Aladdin) has been noteworthy. It has been adequate on another (Pocahontas). However, the songs for last year’s Hunchback of Notre Dame were generic and lifeless, and there’s little sign of improvement here. The fact that Menken tries a different style for this music (the Greek Chorus is a gospel soul group) doesn’t change its inherent banality. Simply put, this is a boring soundtrack.

On the other hand, Hercules’ vocal characterizations are uniformly good. Joshua Keaton and Tate Donovan team up effectively as the title character. Susan Egan (who played Beauty and the Beast’s Belle on stage) is suitably sassy as Meg. Danny DeVito is a riot as Phil, as are Bobcat Goldthwait and Matt Frewer as Pain and Panic. Rip Torn makes for a nicely authoritative Zeus. Cameos include the likes of Amanda Plummer (one of the Fates), Paul Shaffer (Hermes), Hal Holbrook (Hercules’ foster father), and Charlton Heston (the narrator). But the real star of the show is James Woods, whose Hades is the most vibrant Disney creation since Robin Williams’ Genie. Hades is a lively villain with a great repertoire of one-liners. And, although Woods isn’t as much of a vocal chameleon as Williams, he’s close enough that it hardly matters.

Hercules is saturated with cultural references — points should be awarded for anyone who spots them all. There are nods to MacDonald’s (over 5,000,001 served), “chariot chasers”, I Love Lucy (“Zeusy, I’m home!”), Siskel and Ebert (“two thumbs way, way up for our leading lady”), and other pop phenomena. Most amusing of all, however, is the way Hercules willingly lampoons its own reputation, taking several jabs at the inevitable merchandising whirlwind that surrounds its release.

So, although Hercules is undoubtedly one of the summer’s most lightly enjoyable motion pictures, I couldn’t shake the feeling that it could have been and done more. Those on the lookout for another Disney masterpiece won’t uncover it here. However, anyone with the modest goal of finding a screen solution to the problem of a family outing need not worry: Disney’s 35th animated motion picture fills the prescription.