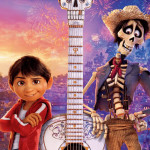 Parallel to Disney/Pixar’s golden touch for presenting complex emotions in a fitting fashion for youthful audiences, those words and the 247 more that follow serenade the ordinary and extraordinary virtues of turning life’s melancholy into optimism.

And that’s just the signature song. Wait until the rest of Coco’s stirring vibrancy awakens even more senses and heartstrings. Softening a setting of gallows humor as few films have, family entries or otherwise, Coco is a divine representation of the human condition rooted respectfully within marvelous cultural heritage. Nearly every pluck of an animated guitar string in Coco strums chords of creativity and compassion.

Young, single-dimpled pre-teen Miguel (voiced and sung by Anthony Gonzalez) was born into the Rivera family of shoemakers in Santa Cecilia, Mexico. A prologue of colorfully rendered paper cut-outs strings out and describes a family history that began in fame and music before footwear. Bound by his Abuelita’s (Renee Victor) rules banishing the practice of music in the household, the prodigal son Miguel secretly idolizes the deceased entertainment legend Ernesto de la Cruz (Benjamin Bratt, exuding swagger) and teaches himself to play guitar.

LESSON #1: EXPLORE THE “DAY OF THE DEAD” CUSTOM — The annual “Dia de Muertos,” or “Day of the Dead,” holiday is upon Santa Cecilia and altars called “ofrendas” are being adorned at homes and gravesites with pictures, marigolds, candles, and treats to invite the deceased to revisit their families in the land of the living. The end credits of Coco document expansive research teams and encourage interested viewers to learn more about Dia de Muertos at their library. Take them up on that advice.

Running away from home, incomplete clues lead Miguel to believe a connection exists between he and Ernesto de la Cruz. A magical mistake of happenstance involving Miguel stealing Ernesto’s original guitar has yanked him and his street dog companion Dante out of the living world and plunged them into the cartoonishly ghostly, artful, and skeletal afterlife, an infinite architectural hereafter of floating favelas. There, Miguel’s ancestors and a clumsy and charming charlatan named Hector (a very engaging Gael Garcia Bernal) help him learn his roots and find a way back to the Land of the Living in time.

Co-directed by Lee Unkrich (Toy Story 3), Coco can become scatterbrained by its overly typical lost-and-found narrative arc and its invisible ticking clock. Like Inside Out two years ago, less manic in that department would have served the film well as it was already juggling and cramming a multitude of world-building and supporting character tangents. However, similar to the otherworldly creativity of Monsters, Inc., Coco’s vivacious Land of the Dead setting bursts with inventiveness and impeccable technical prowess. From the fluorescent colors of mythical spirit animals to the decorative etches in the faces of every talking skull, the film is a visual feast with its heart in the right place.

Mirroring Miguel’s desire, the music is the real essence of Coco, Pixar’s first true musical for the Mouse House. Lovely songs written by the team of Germaine Franco, Kristen Anderson-Lopez, Robert Lopez, and co-screenwriter Adrian Molina are backed by sumptuous mariachi instrumentation from Oscar-winning composer Michael Giacchino. The Pixar specialist’s empowered blend of brisk brass, perky percussion, and tranquil guitars is pure perfection for this cultural and spiritual landscape. Evoking such a convincing ethnic vibe, Giacchino expands the unmeasured limit to his range. Reprising from earlier, “Remember Me” might be the best original song ever created for a Pixar film. You can keep Randy Newman’s plain and warbly “You’ve Got a Friend in Me” from Toy Story.

LESSON #2: THE BENEFITS OF BEING MUSICALLY INCLINED — One character in Coco declares “never underestimate the power of music.” The stir of music is undeniable. Embrace it. Tap into that. Exercise your brain to learn an instrument and share that passionate talent with others.
Just when you feel Coco exhausts its occasionally hokey home-seeking trajectory, here comes what this website has long-called the “Pixar Punch.” Raw, quaint, and perfectly calculated in amount, pace, and timing, the culminating emotionality of Coco knocks out hearts both young and old. Zowie, when the Pixar Punch hits, it hits, spreading a purifying salve over everything. Best of all, these body blows never feel manipulative because Pixar creates characters and fantasies that consistently earn your empathy.

LESSON #3: THE LIVING KEEP THE DEPARTED ALIVE — The memories of those still here are what keep those deceased from being forgotten. Every reminisced story or passed-on tale of influence and inspiration create a shared consciousness. Dia de Muertos takes that ideal to a large and celebratory level in making this life lesson a family responsibility. Death requires inevitable acceptance and all memories eventually fade with generations and time, but stronger familial roots can hold that loss away longer.

These LEGO Classic Creative Blue Bricks 11006 Kids’ Building Toy Starter Set with Blue Bricks to Inspire Imaginative Play, New 2020 (52 Pieces) are a great way to have fun as well as watching the movie!