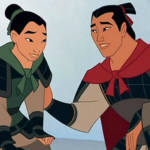 Disney constantly returns to its favorite stable of story ideas—classic tales that are conveniently royalty free. This time they went to ancient China where they dug up the tale of Mulan. Originally set in a poem, a woman disguises herself as a man in order to serve her country in battle. Of course, legends come in different flavors, and Disney adds one more to the list—fortunately, it’s a good one.

When the Huns attack China, Mulan’s family is called to provide one soldier. Her father, an aging former war hero, accepts the request. Seeing her father head off to battle, however, is more than Mulan (voiced by Ming-Na Wen) can stand. Knowing he is too frail to return alive, she wants to take his place. But to do so, she must be a he.

No Disney heroine is going to let a little thing like gender stand in the way of duty! If we can turn a mermaid into a human, then it’s no sweat for a gentle blossom to become a man. Stumbling in her oversized fighting gear and sporting a new bobbed haircut, Mulan is ready for action—even if her comrades are a little skeptical of her abilities. To give her moral support, the spirits of her ancestors decide to send along a powerful guardian dragon. However, things don’t go as planned, and she winds up with a little red fire-breather named Mushu (voiced by Eddie Murphy).

Even with Murphy, the script is clear of any profanities. A short bathing scene where Mulan must protect her identity from the other soldiers is tastefully executed—and funny. Parents’ main concerns will be with the depiction of violence. Nothing even remotely gory is shown, but there is no doubt that huge numbers of people have died by the time the film is complete.

Still, the movie offers great lessons in loyalty, honor, and working together. The animation and music are terrific, and the characters are the type that you grow to love by the end of the story. Mulan sparkles with all the pixie dust Disney is famous for—after all, only magic could put Eddie Murphy and Donny Osmond (who plays the singing voice for the male hero, Shang) on the same credit roll.