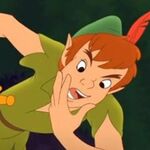 Peter Pan has been performed hundreds of times, with some of the theater’s greatest names delighting audiences in the title role. But it is doubtful if the wistful fantasy has ever been done with such charm and beauty as fills the Walt Disney version of James M. Barrie’s fanciful play. In a film that will captivate and amuse adults as fully as it will hold the rapt absorption of children, this Technicolor all-animation treatment of Peter Pan, “the boy who wouldn’t grow up,” captures the imaginative spirit of childhood to a nostalgic degree not possible in any other medium.

Given magically beautiful sets that are sheer fantasy in themselves, Peter Pan also has a lilting music score by Oliver Wallace to lend enchantment, plus some tuneful melodies that seem headed for the Hit Parade. Among the more outstanding ones are “You Can Fly,” “Your Mother and Mine” and “The Elegant Captain Hook” by Sammy Cahn and Sammy Fain; “A Pirate’s Life,” by Wallace and Ed Penner; “Tee Dum, Tee Dee,” by Wallace, Ted Sears and Winston Hibler; and “Never Smile at a Crocodile,” a nonsensical piece of whistle-bait by Jack Lawrence and the late Frank Churchill.

The tale sticks closely to the familiar tale of little Wendy Darling who is told by her father she is to leave her brothers’ nursery the next morning to have her own room. Desolate at having to grow up, Wendy calls upon Peter Pan who takes her and her brothers to visit Never Land. There Wendy is confronted with many dangers due to the machinations of Tinker Bell, the lovely little pixie who is jealous of her. There are also familiar adventures of Peter Pan with the villainous Captain Hook, who is finally outwitted and defeated and left to fearfully try to outswim the hungry Crocodile who is determined to make a meal of the pirate.

Wendy and her brothers are taken back home in the sky-flying pirate ship and Wendy tells her parents about her adventures in Never Land, confessing she is glad to be home and willing to grow up. Her skeptical father looks out the window and is amazed to see the ship as it passes in front of the full moon. It is a ship that he feels he has seen before — when he was very young.

Bobby Driscoll does the voice of Peter Pan to perfection, with Hans Conried delightful as the rascally Captain Hook and as the pompous father. Kathryn Beaumont’s voice is appealing as Wendy, and Candy Candido is good for laughs as the Indian chief, particularly in his basso profundo version of Cahn and Fain’s “What Makes the Red Man Red.” Bill Thompson, Heather Angel, Paul Collins, Tommy Luske and Tom Conway also lend their voices in pleasing fashion.