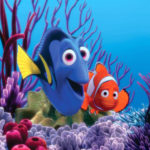 Finding Nemo is a movie full of memorable characters and action.

This family movie doesn’t follow tradition and it doesn’t take the easy way out. This movie tells a story that can be related to real life …

Finding Nemo is about Marlon, a father fish, who, after losing 499 children and his wife to a deadly creature in the ocean, also loses his son Nemo to a scuba diver. The diver takes the little clown fish to a dentist who is known to keep fish, preparing to give him away to his psychotic niece known only as a “fish killer.” Meanwhile, Marlon sets out with another fish named Dory, who has a short-term memory loss problem, to save Nemo.

Although Marlin knows nothing about where his son is, he is determined to find him, no matter how rough the waters ahead may be. The nervous clown fish embarks on the journey of a lifetime, in hopes of rescuing his son, Nemo. It seems to be luck when Marlon meets up with a friendly blue tang fish named Dory, who saw which direction the diver’s boat was headed. The problem with Dory is that she has short-term memory; and of course she doesn’t remember which way the boat was going.

The interesting thing about the movie Finding Nemo is that it is not perceived as comedy as it is a dramatic adventure story. Whether its lack of comedy is intentional or not is anybody’s guess. Nevertheless, children, looking for only the more simple goofy looking fish, should still find this movie entertaining. Parents and other older adults can enjoy it also.

Finding Nemo is a fun adventure story, but lacks some of the comedy that made the other Pixar/Disney movies so wonderful.